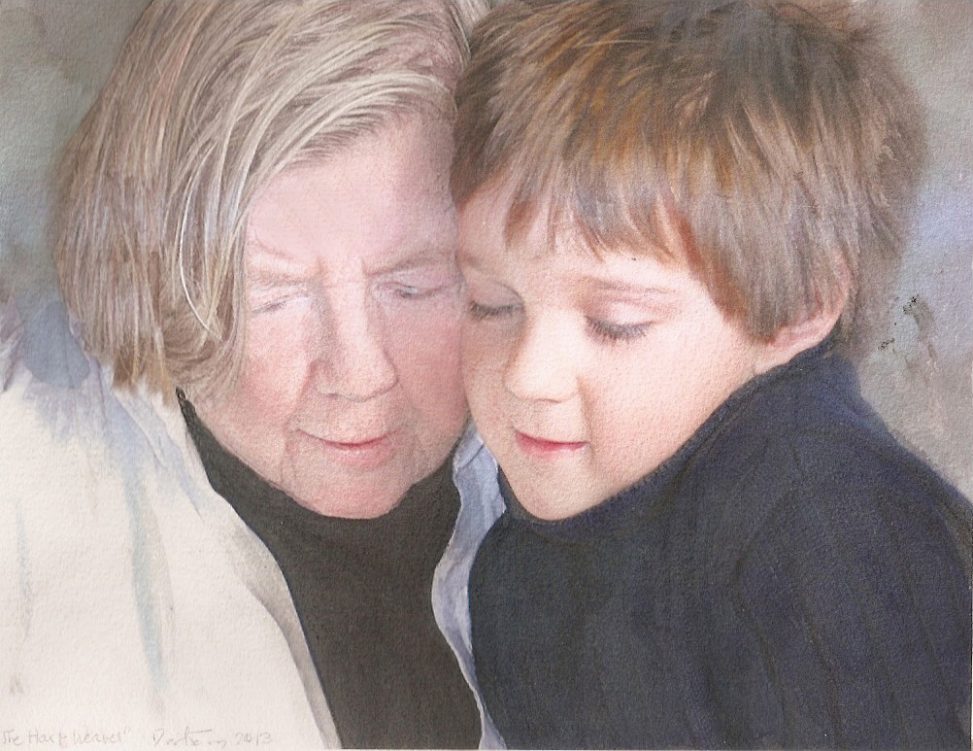 “The Harp Weaver” (a portrait of my longtime friend, Newby Day, & her youngest grandson)

The obligatory, accompanying song would, of course, be found at: http://www.youtube.com/watch?v=wQhCNOV5Gnk

I know, I know….I’m irretrievably sentimental about certain things.  I should emphasize that, in the photograph from which this painting is derived, Newby and William were mutually inspecting an I-Phone’s image-system, or something equally un-sentimental.  That said?…..

Newby does, indeed, love her two grandsons. The youngest has his father’s eyelashes…..and his mother’s mouth (which, as you can see, is HER mother’s mouth).  I’ll be giving this to Marcy (one of Newby’s two daughters).

Is it too obvious that all I really cared about, when drawing/painting this, was Newby’s hair?  It was, once upon a time & like that of both of her daughters, red….now, it’s a  very fine silver….not a stray, wiry, coarse hair in it……(it’s very lovely, I think).

….And the harp with a woman’s head
Leaned against her shoulder.

Her thin fingers, moving
In the thin, tall strings,
Were weav-weav-weaving
Wonderful things.

Many bright threads,
From where I couldn’t see,
Were running through the harp-strings
Rapidly,

And gold threads whistling
Through my mother’s hand.
I saw the web grow,
And the pattern expand.

She wove a child’s jacket,
And when it was done
She laid it on the floor
And wove another one.

She sang as she worked,
And the harp-strings spoke;
Her voice never faltered,
And the thread never broke.

And when I awoke,-

There sat my mother
With the harp against her shoulder
Looking nineteen
And not a day older, …

….And piled up beside her
And toppling to the skies,
Were the clothes of a king’s son,
Just my size.”