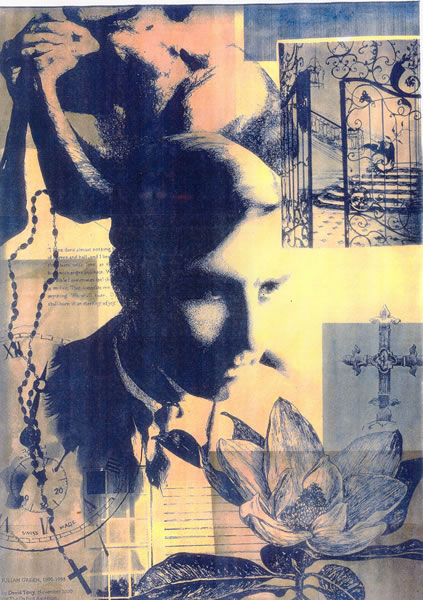 Julian Green (for the Oxford American)

for “The Oxford American”
Pen & Ink, watercolor
2001
This is the portrait to which I referred in the opening comments of this category…..the commission that the Oxford American’s art-director (a very nice, well-intentioned woman) described as “PERFECT for you!”…..
For various, somewhat-convoluted reasons, I found myself, three years ago, in Savannah…along with my hyper-educated & hyper-active French mother-in-law (known in this and several other households as “Hurricane Danielle”). She wanted to see, of course, EVERYTHING!!!!
Late that afternoon, we fetched up at the Green House (one of the historic district’s most prominent house/museums), but were told that the doors were being closed for the day. Somewhat desperately, I told the docent that the house had been DONATED by the grandparents of the husband of a VERY GOOD friend of mine that we had dinner with JUST LAST NIGHT (!!!!)….so, could we please come in if we were quick about our business?
She let us in. A few minutes later, I was, in fact, quite surprised to find my portrait of Julian Green (the grandson of the house’s builder) fancily-framed and prominently hung in an upstairs room. The portrait itself had been donated by the mother of the Savannah friend whose grandparents in-law had donated the whole to the city.
The whole experience was one of those very-southern experiences during which you try to sort out all the “connections” before, finally and wisely, deciding to simply give up on the business of determining who’s-related-to-whom and in-how-many-ways.
My mother-in-law was mightily impressed.