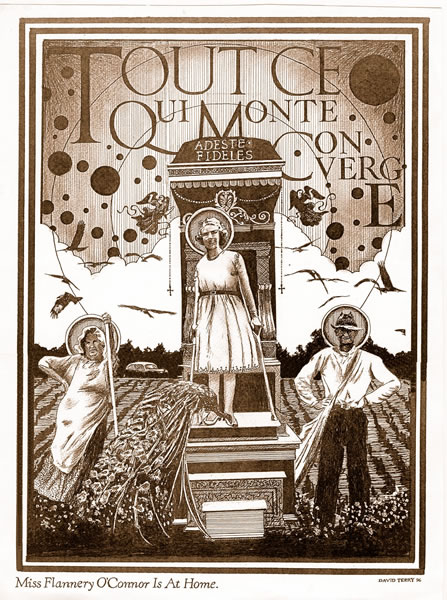 pen and ink
for Barnes & Noble
1996
Oh…one of my longtime favorites (although, actually, I can’t recall where the original eventually sold). For some reason I can’t quite figure out, I keep getting a check for about a hundred dollars, every year, from MacMillan Publishing; I gather that, at some point, I gave them rights to use this picture in some textbook they publish about American Women Writers. This business has been going on for almost ten years, and I’ve always thought it best not to ask any questions. A hundred dollars is, still, a hundred dollars.
I wrote my Honors Thesis on O’Connor at Sewanee. Consequently, I can do a parrot-like recitation of pratically everything she wrote. In the end, it’s rather like being a Jane Austen specialist….there isn’t, finally, THAT much to get under your critical belt…..
P.S. The quotation is from Tielhard de Chardin, one of Flannery O’Connor’s big-crushes among post-war Roman Catholic theologians…..