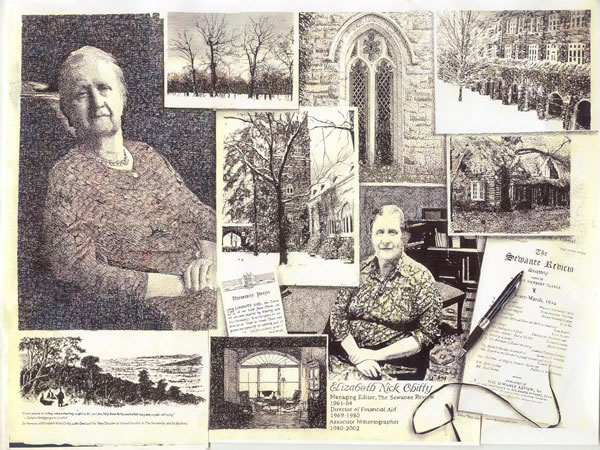 Pen & Ink
20″x24″
2004
Elizabeth Chitty (known for decades as “Betty Nick” to friends, and to students as “MRS. Chitty”) was (among the posts she held during her years at Sewanee) the Financial Aid Director. You don’t have do more than scratch among the Sewanee alumni to immediately fetch up with at least twenty people (from every year’s class) who’ll say “Oh….that was the year Mrs. Chitty told me “Give us some time. We’ll find a way to pay for this, but you are NOT going to have to leave Sewanee….don’t you worry…”
I should emphasize that, the year before I was to go to Sewanee, my father had, at age 39, had a completely debilitating & almost fatal stroke (it took him years to recover). I was already accepted at Sewanee…but it suddenly seemed I wouldn’t be going anywhere, as my family’s finances were thrown into complete disarray. Mrs. Chitty was on that telephone and writing those letters within a month, and I ended up with one of the 4-year Fooshee scholarships. Obviously, I’m quite among those who have Mrs. Chitty to thank for four of the best years in my life.
It’s gratifying to see, these days, how many folks still recall her **QUITE** distinctly and with utterly complete gratitude for her many kindnesses, to many people and over many years.
I drew the picture a few years ago and donated it to Sewanee, where I gather it hangs in their newfangled alumni-center.