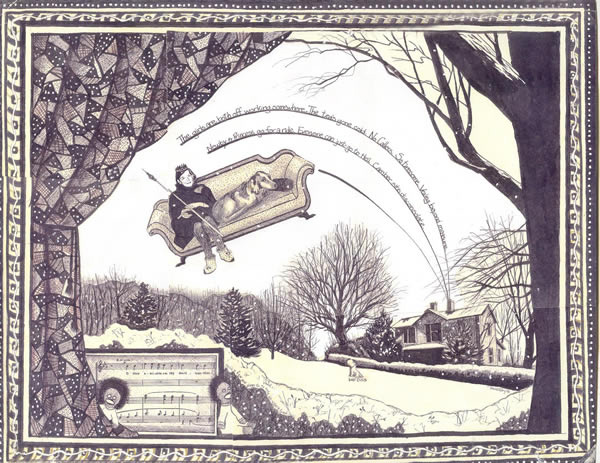 AWOL in the Hysterical District. Portrait of New Day and Sealyhams. Charlottesville, VA

Pen and Ink
1997
Well, this is one of my favorite pictures, ever….of one of my dearest, longtime pals.
Newby lives in a rather astonishing (if you go behind it, you realize the dang thing is actually five stories high) 1850 house in Charlottesville’s Hysterical District, and I’ve spent many-many, wonderful days there since she and her daughters first invited me in 1983.
Over the years, the big, old, drafty (good in the summer, bad in the winter), and evocative house has been filled with ancient parrots (including “Zelda”, given to Newby’s MOTHER for her wedding sometime during, I think, the Garfield adminstration) and vicious (if finely-bred) sealyham terriers.
I could talk about Newby forever, but I won’t, just now…..