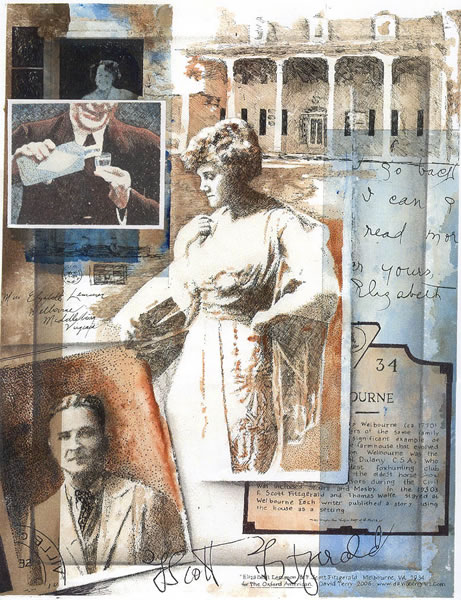 for “The Oxford American” (Winter 2006 issue)
16″x 20″
india ink & watercolor
Among the commissions I’ve had from the Oxford American Magazine, this was the most pure-fun. It accompanied an article which detailed Fitzgerald’s two (maybe three?) visits to Welbourne, in Loudon County, Va. Basically?…Elizabeth Lemmon was (in addition to being the great-aunt of Welbourne’s current owner, Nat Morison) a very smart, very kind, and very lovely woman who, for many years, was a close friend of the famous editor, Maxwell Perkins (google the book “As Ever Yours: the Letters of Max Perkins & Elizabeth Lemmon”). At one point during Fitzgerald’s careening & declining Final Days o’ Dypsomania, Perkins prevailed on Lemmon to take Fitzgerald in for a couple of visits….hoping that some good air in some pleasant, gentle surroundings might help the man to actually cough up a finished manuscript.
Each of the visits was, to put it bluntly, a fete worse than death. In a word?….disastrous. As Sebastian Flyte would say?…”too-too wince-making….”
Perkins (perhaps overly presuming on Lemmon’s kindness) also tried to have bigass Thomas Wolfe sent down to Middleburg during one of Wolfe’s difficult periods. To his credit, Wolfe visited once, didn’t stay the night, and later excused himself from further visits with an extremely thoughtful, gracious, and sort of genuinely-sad note to Elizabeth Lemmon.