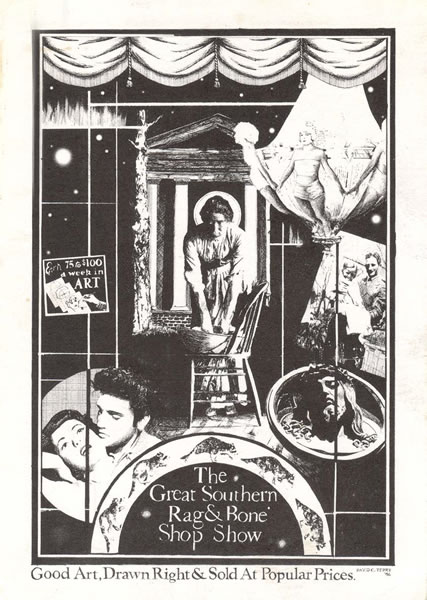 india ink on paper
22″x26″
1997
This was the invitation card to my first, completely surprising (to me, at least) gallery show. I clearly recall being distinctly-out-of-my-element at some fancy barbecue in 1996 when John Bloedorn (one of the two owners of Craven Allen Gallery) introduced himself, saying he liked the ads I did for my friend Suman’s indian restaurant, and would I like to have a show?
At that paticular moment, I thought “Why is this very handsome stranger, in nice clothes and a foot taller than me, asking me about some damn ‘art show’?”
Having thought that, what I **SAID** was “I don’t do ‘art’. I’m writing a dissertation on Thomas Hardy, actually”. Talk about a snooty-boots with a napoleon complex?…..
In any case, he said he already knew that (the man is by no means a dummy, and he does his homework), and he merely said I should try.
So, I had my first show, for which I didn’t really do a thing beyond fetching up pen&ink representations of everything I’d loved (or,in equal measure, that had bothered me) about the South over the previous three decades.
I did, finally, finish up the Hardy dissertation….but I took John’s good advice and stuck with art. It was only a year or two later that (while being interviewed by some newspaper reporter) I heard myself saying “Well…it’s pretty simple….I discovered that drawing the outsides of books is a lot easier and is more fun and pays more than writing the insides of them….”
Thus are bad attitudes born…..