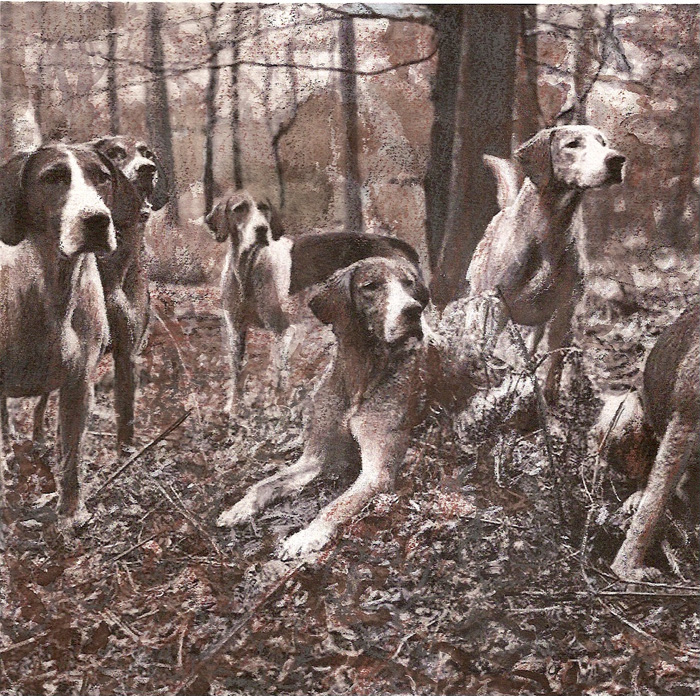 oil pencil and watercolor
10″x10″
2009
For (and quite fondly so) my very funny & way-smart friends, John Shelton Reed and Dale Vogler Reed of Chapel Hill, NC; from the “Traveler’s Rest” show.
John’s written a boggling number of books on what could be understatedly be referred to as a w-i-d-e variety of subjects….sociology, history (he and Dale are currently off at Oxford, researching his second book on Anglican history), the-South-in-General….the list goes on and on (look ’em up on The Google). Last year, he and the formidable/wonderful Dale (whom a friend, having met her at my house, later described as having “an IMPECCABLEbullshit meter”) jointly wrote & published “Holy Smoke: the Big Book of North Carolina Barbecue”…..don’t ask me how they manage to do so many things. At the same time?…they’re two of the funniest people I have ever met in my entire life. Of course, John’s the man who wrote (when MLK day was stil a topic for heated debate here in NC) “In any case, those who disapprove of his holiday will have their revenge soon enough. It can’t be long until the same people who have trivialized George Washington’s birthday get to work on Dr. King’s: “Stock up on Sheets during Our MLK Birthday White Sale!”…”Free at Last? Not Quite, But Greatly Reduced!….”
Not really surprisingly?….John and Dale both turn out to have been born and raised in Kingsport, TN, about twenty miles north of my hometown. The local tempermental economy hasn’t ever afforded much tolerance when it comes to foolishness.